What makes up Chen-style Tai Chi?

This article takes a look at each of these pieces and how they fit together into Chen Tai Chi.

Zhan Zhuang literally means standing like a post, also known as standing meditation. It is a training method, in which static postures are held to develop correct structural alignment, to develop efficiency in movement and maximal strength for martial applications. When combined with tu-na (qigong breathing exercises) it also helps to develop deep levels of relaxation and body awareness and helps remove blockages and increase circulation of internal energy (qi). This practice is known to have many health benefits such as improving posture, calming the mind and to improve breathing patterns.

Silk Reeling, also known as Chansujin, is the principle method of movement within Tai Chi. Silk reeling is considered the essence of Tai Chi and helps develop the health and relaxation aspects associated with Tai Chi.

The key to practicing silk reeling correctly is to allow the whole body to move with the movement originating from the centre of the body (the dantien). The attributes gained from silk reeling practice should be incorporated into all aspects of Tai Chi practice.

Short Forms are ideal for those seeking the health and relaxation benefits of Tai Chi. They were developed as they can be learnt in a much shorter time, need less space to practice in, in comparison to the long forms which take longer and are complicated to learn. We teach the 11 short form developed by Master Liming Yue and the 18 short form created by Grand Master Chen Zhenglei. Both short forms contain the essential elements of Tai Chi, yet despite their simplicity they do not compromise Tai Chi principles.

The second routine is also known as Cannon fist (Pao Chui) and comprises of 43 movements. It is considered an advanced routine and consists of fast, explosive movements known as fajing. The routine expresses hardness with an element of softness with all movements initiated with the principles of silk reeling.

Both routines compliment each other and hardness and softness are combined harmoniously.

Xin Jia (new frame) is comprised of two routines; Yi lu (first routine) some times referred to as the 83 form due to the number of movements contained in its framework. Er Lu (second routine) also known as Cannon fist (Pao Chui), due to its fast and powerful movements and consist of 71 movements.

Xin Jia was created by the legendary Grand Master Chen Fake who feared the martial abilities of Tai Chi were being lost due to the subtle nature of its practice. He based the movements on Lao Jia adding more detail and length to the routines. Xin Jia contains more physical movements, guided by internal energy such as; explosive movements (fajing), jumps, leaps, twisting and spiralling movements emphasising locking techniques as well as expressing more martial abilities than Lao Jia.

Push Hands is considered the first step for students to help understand the martial aspects of Tai Chi. On a basic level it involves two students with their arms in contact. The students practice sticking, twining actions to develop sensitivity, balance and awareness within ones body and the opponents. It helps develop a sense of how small forces can over come stronger forces.

In Chen Tai Chi, push hands can be practiced on a number of levels to help develop martial abilities. The exercises can be practiced both soft and hard and fast and slow. There are five levels of push hand exercises which take the student from simple sticking actions to free style grappling. This involves pushing, pulling, throwing, sweeping and locking, and to free style sparring.

The five levels of push hands are:

The first four methods can be practiced softly with an emphasis of gaining sticky energy, sensitivity and a sense of balance. Through regular practice the exercises can be performed faster and with relaxed strength with an emphasis of un-balancing, locking, or throwing your partner.

The fifth method utilises all the attributes gained from the previous methods in a free style manor. It includes two students trying to lock, throw, trip and sweep each other to the floor. 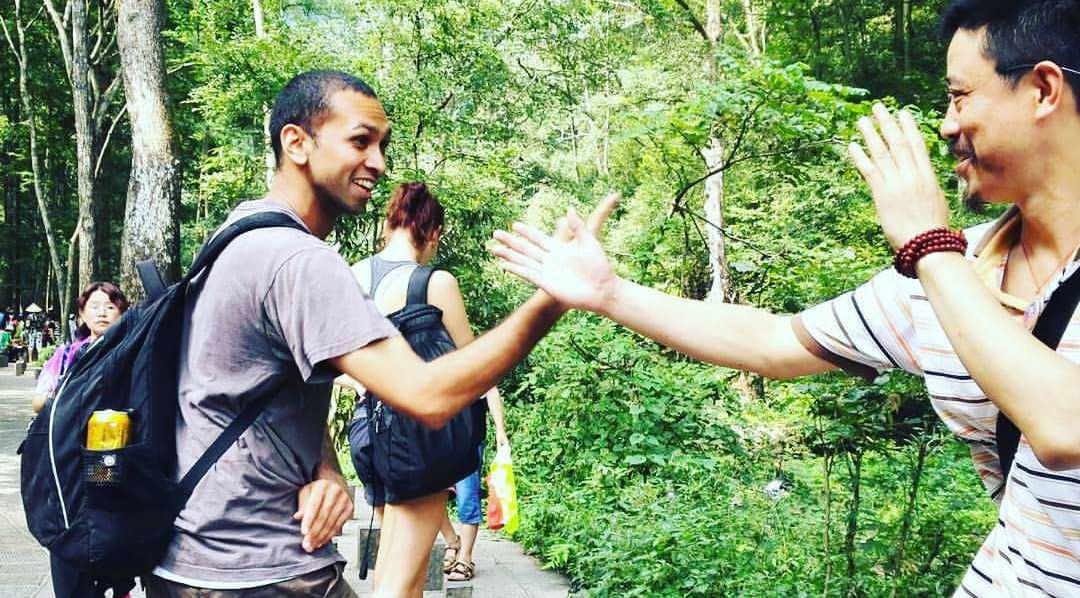 Martial Applications are the attack and defence movements of the Tai Chi form movements. In Chen Tai Chi each movement from the forms has numerous martial applications consisting of blocking, striking, locking and throwing techniques. Each application utilises attributes gained from push hands training.

When practicing the sword form the sword is thought of as an extension of your arm and the sword movements all originate and are led by the body. The Sword routine contains thrusting, cutting, scooping, pointing, sweeping, intercepting and pushing movements.

The Tai Chi sword routine is circular, flowing and graceful in its movements combining hardness and softness along with subtly quick and slow movements. Training with the sword helps develop flexibility, fluidity and precision. Performing the sword is likened to an ‘undulating dragon’ or a ‘phoenix soaring and circling the air’.

Sabre Form is made up of twenty two movements and is characterised by long range strikes, cuts, hacking, chopping and sweeping blocks. The sabre form demonstrates Chen Tai Chi’s power and explosiveness. The form is short and easy to learn; it is performed with speed and power and develops Fajing (explosive power). When practicing the sabre it is important to have co-ordinated and balanced footwork and mastery of the weapon involves how well you use your free hand to support the sword wielding hand. It is said “to know the single sabre, follow the left hand”.

Pole Form consists of thirteen movements and is considered an advance weapon and training method. The form is highly energetic and every movement is very practical with simple movements.

The form is practiced with a 3 meter wax wood pole and weighs about 4.4 pounds and it can be heavier depending on the pole and the material it is made of.

When performing the form or singular movements the practitioner tries to make the end of the pole shake. This helps to bring integrated strength up through the body, in to the arms and in to the pole. Making the pole shake helps to develop internal strength and a way to test this strength.

Spear Form also known as the “Pear flower spear and White Ape staff”. The Chen spear contains seventy one movements and contains pole/staff techniques as well as those associated with the spear. In Tai Chi spear training is considered an advanced weapon form and is difficult to learn. In China it is said “a 100 days to master the broadsword and a 1000 days to master the spear.

Gwandao Form is an advance weapon form also known as ‘spring autumn broad sword and Green dragon crescent moon broadsword’, comprising of thirty movements. A Gwandao is a Chinese halberd, with a long shaft, a sabre attached to the top and some times a spear end at the bottom. The Gwandao was the favourite weapon of Chen WangTin the founder of Chen Tai Chi. Training with the weapon helps develop whole body power and strength.